+12
RUS
Annual season ticket for the price of 7 tickets
Rest all year round for only 14 thousand rubles
Animation program
Street animation, fiery artists, fascinating theatrical performances - fantastic program is included in the price of a single ticket
Attractions of the European level
For children, families and for those who like to be thrilled
Ferris wheel: online is more profitable
Buy your ticket online and enjoy your evening ride on the Ferris wheel with up to 23% discount
Discover your Sochi Park
Mom and baby For kids For families For the best friends Sea-coast route Extreme route Fairy tale route Insta-friendly
Sochi Park is perfect for outdoor activities with kids. The youngest guests will be delighted with miniature attractions, interactive playgrounds and a rich animation program
Read more
Also stop by
Owl Emporium
Konek-Gorbunok Carousel
Rockers for kids
Dolphinarium
Fairytale Theatre
Water playground
Roller
Space Jungle
Current events guide for today: May 11 View all
Tue 11
Wed 12
Thu 13
Fri 14
Sat 15
Sun 16
Mon 17
Tue 18
Wed 19
Thu 20
Fri 21
Sat 22
Sun 23
Mon 24
Sorry, no shows or events for today
But there are many other entertainments in the park:

Bogatyr’s Race
Are you ready for a pleasant journey through the fairytale town? Then choose a car and hit the road!

It is easy, fast and comfortable to buy an unlimited ticket to the park on the website.

Day of Baron Munchausen in Sochi Park
May 12 is a day of incredible stories, adventure quests and a meeting with the author of a book about the new adventures of Munchausen

Sochi Park will celebrate Easter and Victory Day
Dozens of thematic decorations, photo zones and fabulous performances from May 2 to 10.

Sochi Park is the winner of the prestigious Tvil.ru rating
The best weekend idea is to spend time in Sochi Park, a popular travel site has confirmed this.

Sochi Park joins Earth Hour
One hour without electric lighting in support of the environmental campaign.
To Sochi Park for 100₽!
On their birthday the guests are given a ticket to Sochi Park for 100 rubles only!
Tickets to the park as a gift
Only guests of the Bogatyr Castle Hotel receive complimentary tickets to Sochi Park
Keep in touch!
Subscribe to our newsletter and be the first to know about all the hot offers!
#SochiPark

#SochiPark
Reload
We've got a lot of interesting entertainments
Quantum Leap
Take a thrilling ride on the attraction that challenges earth’s gravity! The highest and fastest extreme roller coaster in Russia (58 meters high, 105 km /h)
Attraction
The best birthday
Birthday in Sochi Park is an event that will forever remain in your memory with bright childhood memories! On his birthday, we give a birthday party ride on rides and organize fun entertainment surrounded by fairy-tale heroes!
Entertainments
Excursions in the Atomarium

Atomarium is a high-tech "Wonderland", you can "touch" science with your hands and see the operation of physical laws and technical inventions. 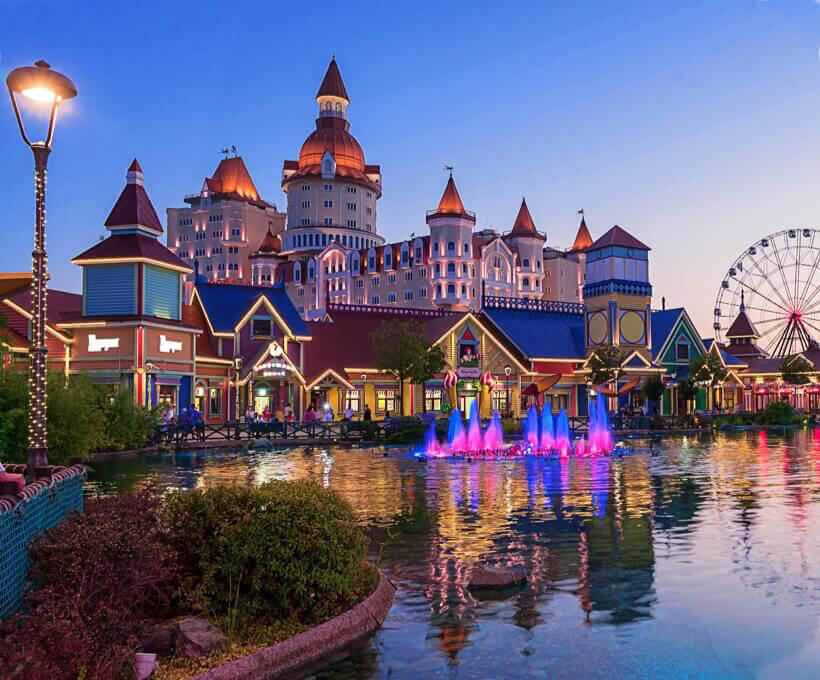 Take a step towards the fairy tale

Sochi Park is the country’s first theme park and one of the most powerful new magnets attracting tourists from all over the world to Sochi. For four years in a row, it confirms the title of the first and best open amusement park in the country and the CIS with the number of visitors over a million people per year, and in 2016 it entered the top 25 best parks in Europe.

On an area of 25 hectares in Sochi Park the modern attractions of the world level and hotel «Bogatyr» are located.

Entertainment and recreation in Sochi Park

In the theme park there are lots of entertainments for the visitors of any age. All guests are interested in attending a performance at the dolphinarium, watching a show, going through a quest or a master class. For the little ones, the park has a corner with swinging rides. For older children, there are children’s and family attractions where you can ride alone or with parents, the Space Jungle rope park, a water development area in the Eco-Village, science shows and an open-air play laboratory. And unique extreme attractions wait for teenagers and adults.

Like the world’s best analogues, Sochi Park implements a visitor-friendly concept of single entry ticket. The whole day in the park, an unlimited number of rides on the amusement attractions, master classes, playgrounds, a dolphinarium and a variety of shows — the guest gets all this for the cost of one ticket.

Read more
Choose ticket
To select a tariff more accurate, we recommend to measure the height of guests taking into account shoes. Entrance for children under 107 cm in height is free
Up